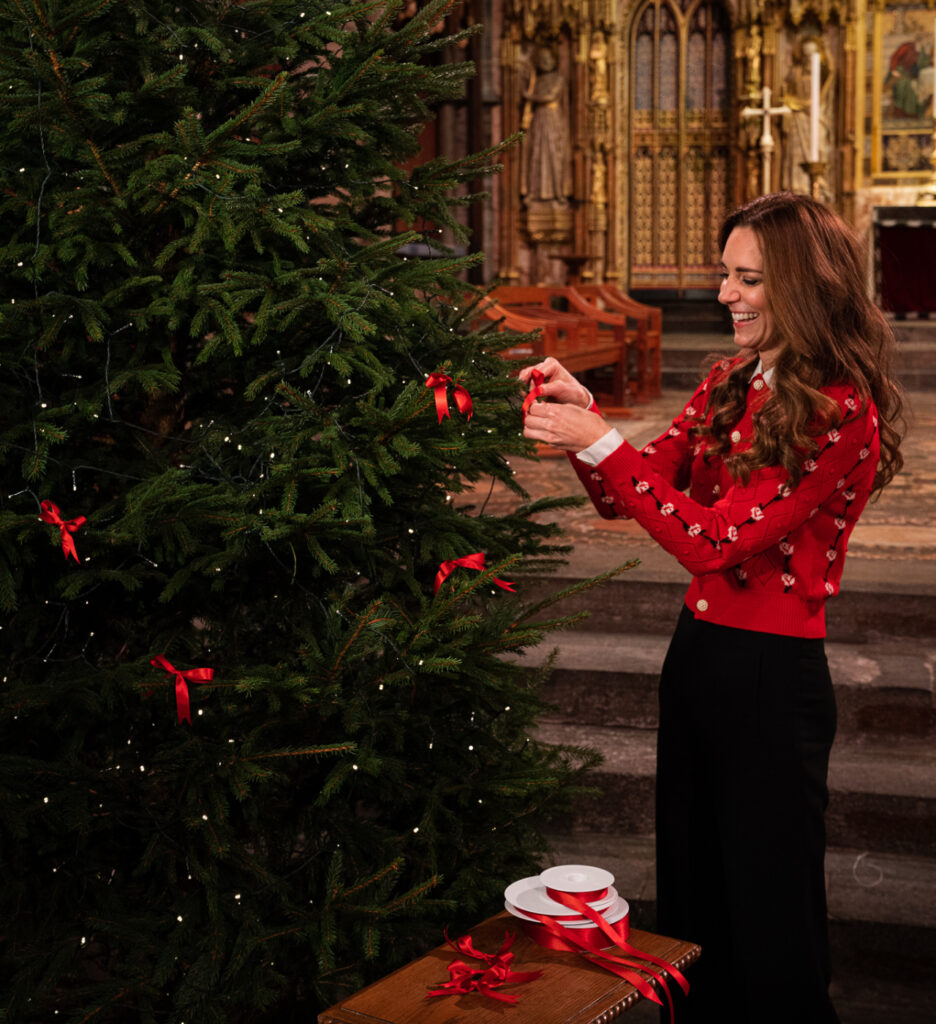 THE DUCHESS OF CAMBRIDGE RECORDS INTRODUCTION FOR CAROL SERVICE BROADCAST

The Duchess of Cambridge has recorded a special message to introduce Royal Carols: Together At Christmas, the broadcast of her community carol service which will air on Christmas Eve on ITV.

During her introduction The Duchess speaks about why she wanted to host the event, which took place on the 8th December at Westminster Abbey. Her Royal Highness explains that she wanted to thank those who have gone above and beyond to support their communities during the pandemic, celebrate the acts of kindness that have been witnessed across the nation, and recognise others who may have particularly struggled over the past two years.

The message was recorded the day before the service during a visit by The Duchess to the Abbey to help with preparations, including decorating Christmas trees donated by Her Majesty The Queen from Windsor Great Park and arranging wreaths that were donated by the Royal Horticultural Society.

The message was recorded the day before the service during a visit by The Duchess to the Abbey to help with preparations, including decorating Christmas trees donated by Her Majesty The Queen from Windsor Great Park and arranging wreaths that were donated by the Royal Horticultural Society.

Spearheaded by The Duchess, and supported by The Royal Foundation, the Together At Christmas carol service was attended by unsung heroes from across the UK in recognition of their inspirational efforts to protect and care for those around them. Nominations were drawn from local Lieutenancies, community networks, charitable organisations and patronages of Her Majesty The Queen, The Prince of Wales and The Duchess of Cornwall, and The Duke and Duchess of Cambridge.

Individuals who The Duke and Duchess met and spent time with during their recent engagements and project work were also present, alongside armed forces personnel who were involved in Operation Pitting, young carers, faith leaders, and guests who may be more vulnerable or isolated within our society.

The service was filmed for broadcast and features as part of Royal Carols: Together At Christmas, a special programme will air at 7:30pm on Christmas Eve on ITV. Alongside The Duchess’ introduction, the programme showcases musical performances by the world-renowned Westminster Abbey choir, Leona Lewis, Ellie Goulding and a special performance by Tom Walker of his Christmas single For Those Who Can’t Be Here.

It also incorporates readings delivered by The Duke of Cambridge, British Paralympian and junior doctor Kim Daybell, actor Tom Felton, and presenter Kate Garraway, in addition to a performance of To The Day, a poignant composition written for the service by poet and writer Lemn Sissay.

The Together At Christmas carol service was developed and delivered in partnership with Westminster Abbey and BBC Studios Events Productions.

“We wanted to say a huge thank you to all those amazing people out there who have supported their communities. We also wanted to recognise those whose struggles perhaps have been less visible too. We’ve been through such a bleak time. We’ve seen so many challenges. We’ve lost our loved ones. We’ve seen our frontline workers under immense pressure. And also we’ve been more emotionally and socially distanced and isolated from each other. But I suppose through that separation, we’ve also realised how much we need each other and how acts of kindness and love can really bring us comfort and relief in times of distress.”